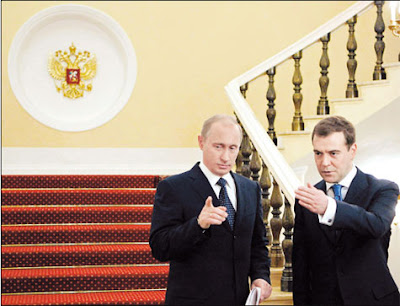 On September 24, 2011, Russian President Dmitri A. Medvedev announced that he would support Prime Minister Putin's bid to become the next president of Russia.

Many Russian watchers were taken by surprise, even though there has been many signs that regardless of Mr. Medvedev's position as the president, Mr. Putin still holds the power. As noted in the New York Times' discussion on the recent airplane crash that decimated the entire Yaroslavl Lokomotiv hockey team:


Mr. Medvedev — whose extraordinary powers are enshrined in the Constitution — is forced to wait many months for Mr. Putin’s permission to declare his candidacy. In May, the president gathered 800 journalists for a news conference that had all the trappings of a major political announcement. Then he said he could not make one.

The reason is that even though as president Mr. Medvedev has all the trappings of power, in reality his power is heavily constricted by the Russian bureaucracy, which is completely controlled by Mr. Putin. Putin has controlled the Russian media and bureaucracy, making it very difficult for Medvedev to push any policies that Putin does not approve.

The incidents surrounding Mr. Medvedev’s event in Yaroslavl, where virtually nobody among of the Russian leadership was in attendance, was to some degree evidence of Mr. Putin's power. It was inconceivable that anyone would snub the most powerful person in Russia, unless there's someone else who is more powerful. In this case, that person is Mr. Putin.

A few weeks ago I had some revealing chats with several Russian analysts, including someone privy to the ins and outs of Russian politics. What I gathered was that Mr. Medvedev is actually popular, and many like him because he is seen as the "good cop," someone more liberal than Putin, respectful to the rule of law, and truly committed to reforming the rotten Russian system. He is also less tolerant to the abuses by uncontrolled law enforcements and government officials.

Yet, all off them agree that there's no way Mr. Medvedev could win the election without Mr. Putin's blessing. Mr. Putin's power is heavily entrenched, supported by many bureaucrats, while Mr. Medvedev's supporters are not particularly organized, and those supporters who are in the government generally prefer to lay low, lest they would be involved in the struggle of power that would be detrimental to their careers.

While Mr. Medvedev's firing of Mr. Alexei L. Kudrin, his finance minister, for insubordination, was seen as his attempt to shore up his power base, the fact that a minister could openly challenge a president demonstrates how wobbly Mr. Medvedev's position has been.

It is true that Mr. Medvedev had years to consolidate his power and build up his own support system, but it appears that Mr. Medvedev's background outside the Russian system proved to be his problem. Russian bureaucrats and political elites would rather throw their support to someone they know (Putin) instead of the outsider (Mr. Medvedev).
Posted by Center for World Conflict and Peace at 8:39 PM