An Update on North Korea 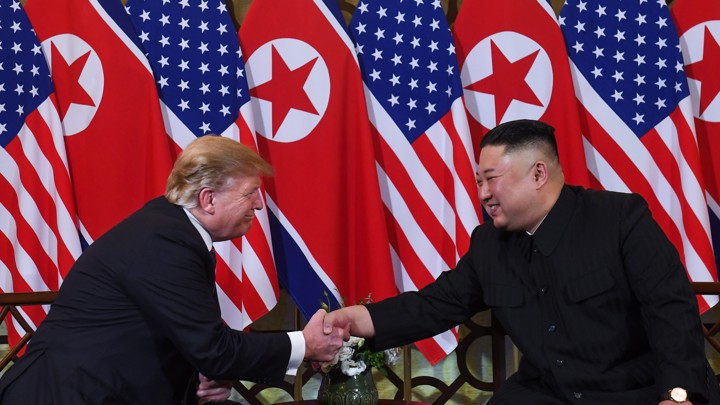 The diplomatic stalemate with North Korea continues. From June 2018 through April 2019, the absence of diplomatic progress between Washington and Pyongyang wasn’t too worrisome. Sure, the heady optimism of the Singapore summit was fading, particularly after the “failed” Hanoi summit, but there were still glimmers of hope. Kim Jong Un and Donald Trump had a good relationship. North Korea ceased nuclear and missile tests. Perhaps both sides were simply taking a breather, a respite, before getting down to the business of substantive talks.

Unfortunately, that hasn’t turned out. Since Hanoi, North Korean-US diplomacy has gone off track. At this point, there is zero discussion between the American and North Korean “working teams.” This means, then, talks are at a standstill since Hanoi.

If you recall, the Hanoi summit broke down without any diplomatic agreement or even a joint statement. The North Koreans were willing to shutter bits and pieces of its program in exchange for some sanctions relief. The US rejected the North Korean proposal, arguing that it wouldn’t offer any sanctions relief until the Kim regime scrapped entirely its nuclear program. There was some hope, particularly among the South Koreans, that Trump was merely posturing, trying to get more bargaining leverage, and that he would eventually change his mind and pursue a more modest bargain. That hasn’t happened yet.

Indeed, the way the Hanoi summit unfolded, with Trump declining North Korea’s offer and abruptly ending talks, has turned out to be a big deal. It shocked Kim and his aides. And, as it turns out, angered him as well. So angry was Kim that recent reports indicated he executed five senior officials, squarely placing the blame on them for the lack of a diplomatic breakthrough with the US. However, whether Kim actually had these five officials killed is the subject of an ongoing debate. Already, one of the five (Kim Yong-chol) has been spotted on North Korean media. It is plausible that Kim wanted news of his ruthlessness leaked in order to communicate—both to his cadre of officials and to the US—his displeasure with the pace and direction of the talks with the Americans.

Another powerful sign that Kim is currently unhappy with the US is that North Korea has resumed missile launches in May (May 4th and 9th). Fortunately, the two tests weren’t ICBMs, which gave the Trump administration enough wiggle room to downplay their significance. Indeed, both Secretary of State Mike Pompeo and President Trump argued that the short-range tests by North Korea were fine—despite their violating UN Security Council resolutions—it’s the long-range rockets that they’d find provocative.

The good part of minimizing the severity of the tests is that Team Trump didn’t feel forced to counter Kim with retaliatory, escalatory moves. The ominous part, though, is that it’s clear Kim is frustrated with the US. The crux of the matter, I suspect, is that Kim expected to receive more tangible benefits as a result of two meetings with Trump. And at this point, the relationship with Washington hasn’t fundamentally changed. The status quo has held. The relationship hasn’t been normalized; sanctions are still intact; and the US still monitors smuggling and other efforts to circumvent sanctions—including the recent seizure of a North Korean vessel. At bottom, the US still has its foot on the metaphorical throat of the Kim regime.

To his credit, Trump hasn’t inflamed the situation. Among other things, he’s refrained from criticizing or threatening North Korea. In fact, he’s gone out of his way to praise Kim—something that’s triggered significant blowback from American media and analysts. Trump has also maintained the shift toward smaller military exercises with South Korea. In an effort to alleviate pressure on Kim, Trump has even stated that he’s in no rush to get a deal done with North Korea

Where do we go from here? Unfortunately, Trump has unintentionally isolated himself. By moving so quickly to an in-person meeting with Kim last June, and then again this past February in Hanoi, it’s pretty evident that Kim wants little to do with Trump’s negotiating teams. North Korea state media constantly demonizes Pompeo and Bolton, signaling that Kim sees them as personae non grata. Kim seeks only to deal directly with Trump. So the onus is on Trump to reassert forward progress. That’s not an optimal way to conduct foreign policy. US foreign policy—an issue that requires deep experience and expertise—shouldn’t be a one-man show. Plus, Trump is likely to be a distracted president over the next 16 or so months, given US domestic politics. He’ll have little time or patience to devote to intractable issue like North Korea.

Of course, all of this begs a big question: What if Kim believes he’s not receiving what he thinks is the appropriate level of attention from a preoccupied Trump? This is where things could quickly go haywire. Kim could do any of a number of provocative acts, including resuming nuclear and ICBM tests, so as to place him on Trump’s, and the world’s, radar. If that happens, we could be back in the “fire and fury” days of 2017.

To avoid a repeat of those times, I have two recommendations. First, Trump ought to try to convince Kim and his lead negotiators to take the American delegation, led by US representative to North Korea Stephen Biegun, much more seriously. Beigun isn’t Bolton or Pompeo, doesn’t seem like a hawk, and so there’s little reason to fear him. Plus, this would allow the US and North Korea, working diligently behind the scenes and away from public attention, to flesh out areas of common interests and the kind and scope of concessions each side is prepared to make—things that Trump and Kim are unlikely to finalize in a one or two day summit. If an insecure and desperate Kim wants face time with Trump, then Trump should give him a summit or two, as long as the working teams are meeting and making some progress on salient bilateral issues.

Second, Trump needs to scrap his “go big or go home” approach to North Korea. The American quest to achieve its maximal desired outcome (which is still CVID or a variation of it) just isn’t working. After all, North Korea just isn’t willing, and it probably will never be willing, to shutter completely and irreversibly its nuclear program. But given the reports on the Hanoi summit, Kim does seem willing to bargain over parts of it. Instead of looking at this as a sign of Kim’s intransigence, as Bolton and Pompeo do, the US should see this as a possible window of opportunity. Trump’s team should be prepared to negotiate with Kim on a proposal built around freezing/verifying/dismantling parts of Kim’s nuclear program (facilities, nuclear material, technology, weapons, etc.). Start small, build mutual confidence in each other, and then move to more ambitious cooperation.
Posted by Center for World Conflict and Peace at 6:22 PM No comments: