American Policy on the South and East China Seas 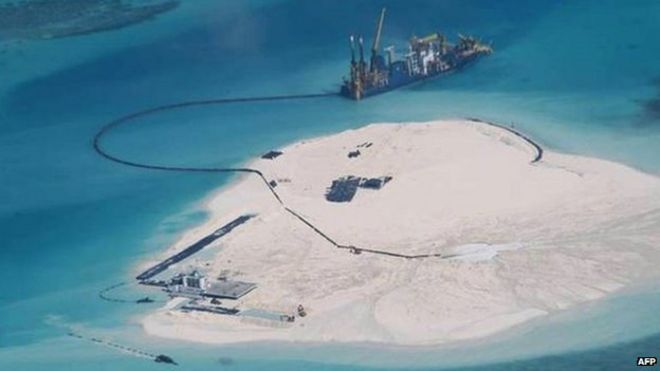 Photo from Philippine Foreign Ministry of a part of China's reclamation projects in the South China Sea.


Arguably, the most ominous issue at stake right now in the Obama presidency does not involve Vladimir Putin or ISIS; instead, it's centers on China's increasingly aggressive behavior in the South and East China Seas. This knotty set of issues threatens to tarnish his legacy and harm US national interests over the long-term.

How severe is the crisis? Let's put it this way: Obama is the US president who so wanted to focus on Asia, with an eye on China, but he might be the one who effectively ceded Asian hegemony to China.

His so-called pivot initially tried to create an image of a tough, muscular US that's fully invested in Asia, one that China shouldn't even think of messing with. The problem, as we now know, is that the pivot lacked teeth. The hardline parts of the pivot weren't significant enough--neither in speed nor capability--to deter china from or punish it for unwanted behavior. The US does plan to shift more military assets to Asia, but by the year 2020. That could be too late. The US has also promised to send and rotate 2500 marines to Darwin, Australia. But those numbers are hardly enough to contribute to playing a strong role in securing the Asia-Pacific. In fact, some Australians immediately saw the perils of the Marines deployment: they're just enough to send a signal that America and Australia might be militarizing against China, thus a provocative move, but not enough to guard against an irritated, threatened China.

Even the TPP, the large free trade pact that's been negotiated for over a decade now and is a crucial part of Obama's pivot, has a strategic, tough guy element to it. The US favors the TPP because it will allow Washington, along with its friends in Asia and the Americas, to write the economic rules of the 21st century, while squeezing China out of such a chance to do so. But such logic is likely misguided. After all, China will be such a large part the world economy going forward that keeping Beijing out of the rule-writing process will only doom the effectiveness of the pact.

Despite the pivot, China decided to test America's commitment to Asia, especially to America's friends in the region. In November 2013, Beijing set up an ADIZ in the East China Sea, which was an effort to place a significant swath of the sea under its control, including islands and waterways contested by Taiwan, South Korea, and Japan. Team Obama criticized the ADIZ, but did little else. In short, the US was willing to abide by China changing the facts on the ground, which, as expected, alarmed countries like Japan that fear being abandoned by the US and left alone to deal with the growing Chinese behemoth.

Since 2012, China has also sought, with success, to change the facts on the ground in the South China Sea. It captured the Scarborough Shoal, though it's also claimed by the Philippines. Chinese vessels have repeatedly harassed Vietnamese and Philippine fishermen, ramming their boats and blasting them with water cannons. In 2015, China placed an oil rig in the South China Sea, despite Vietnamese protests, in an effort to search for energy deposits. Although China moved the rig after about a month, it proved its point: China can come and go in the South China Sea, doing whatever it pleases, without impunity. And the latest developments there are even more worrisome.

Earlier this year, china has ramped up its reclamation projects in the South China Sea. What this means is that China is building on reefs and rocky surfaces, many of which are either submerged in water or barely visible above water, to create man-made islands and outposts that, the Washington believes, totals more than 2000 acres. The presence of these new land features gives Beijing increasingly greater de facto sovereignty over the South China Sea. Why? China is setting up airstrips and bases on these islands, which gives Beijing the requisite muscle to enforce its claims in the area. Some China watchers believe that all the resources now pouring in the South China Sea means that Beijing will impose an ADIZ in the south.

Once we put the pieces of the East and South China Seas puzzle together, that's when we see the real consequences. If China controls both seas, it would be in a good spot to bully East and Southeast Asian nations. And from there, particularly given China's advancing military capabilities, Beijing could turn further beyond its borders by asserting itself vigorously in the Indian Ocean. Hence, this is a wake-up call to the US, of course, but also to Japan, South Korea, ASEAN, and India.

In my view, the above scenario, if it comes true, means that China will be on the road to achieving hegemony in Asia. The last straw happens when China refines and perfects its A2/AD capabilities. Such a situation would lead to a number of troubling possible outcomes: it would make navigating in the air and seas miserable for the US as well as other Asian-Pacific nations; American troops and bases in Japan and South Korea would be in a precarious position; China would be in a ripe position to intimidate if not dominate its Asian neighbors; China would also be well stationed to set the rules on security affairs in Asia.

Whether because Team Obama has been asleep at the wheel, distracted, overly optimistic about Chinese intentions, or some combination of the three, the White House's response to Chinese moves in the South and East China Seas has been purely reactive. Here's what the US has done: it's called for a moratorium on the reclamation projects by all parties in Asia, including China, of course. It's criticized China, saying that Beijing is using its military muscle to bully its neighbors. It also has been beefing up its ties to Vietnam and the Philippines. the US has upgraded its defense guidelines with Japan, and is even considering conducting joint patrols in the South China Sea with Japan. Additionally, to further send a signal to China of America's seriousness about stability in the area, Obama has said that Japanese claims in the East China Sea fall under the US-Japan security treaty.

Is all of this enough to make China think twice before continuing its expansionism? I'm pessimistic, though I'm not the only one. There are calls within Washington, and among policy analysts, to place higher costs on China, to punish China, as it expands outward and flouts international law and norms. John McCain, for instance, has called for Washington to cease inviting China to participate in RIMPAC exercises. Perhaps, but it should start thinking about harsher, more creative measures as well.

In brief, I recommend a two-pronged approach. First, the US should try to impose costs on China's actions in the South and East China Seas. It's currently doing a better job of that in East because of its strong ties to Japan. But the US should also firm up its commitments in the South China Sea. It should expand its military assistance to Vietnam and the Philippines, as well as any other claimant nation. It should publicly, vigorously support both countries diplomatically during maritime skirmishes with China. It should do much, much more to shame China for its acquisitive actions. The US might also want to prepare for the day in which it might need to extend security commitments to Vietnam and the Philippines. Among other things, a major challenge for the US would be finding a way to make this form of extended deterrence credible in the eyes of Beijing.

Second, the US ought to think about forming a maritime league of democracies that spans across Asia. Most importantly, the US should recruit Japan, Indonesia, Australia, and India. These four countries are powerful, influential, politically open and free, and geographically consequential. Indeed, they ring the South and East China Seas and the Indian Ocean. If these four countries could effectively work in concert on the high seas, along with the US, they just might be able to contain China from breaking out of its neighborhood, thereby hemming in, if not pinning down, China. Yes, it wouldn't be easy, and any signs of a proposed league could provoke China into bellicose behavior. That said, if we think tying down Gulliver is the right thing to do--whether to preserve regional stability or to guard the existing liberal order--then it's an idea to weigh heavily for the future.


***Note***An expanded version of this post has been published by E-International Relations. You can find that piece here.
Posted by Center for World Conflict and Peace at 6:45 AM No comments: